To make sense of the symbolism, one has to take the perspective of a satanic death cult which has its tentacles in corporations, politics, media & science.

What are dancing nurses and sick beds doing in an Olympic opening? The birds-eye view of the complex is a one on one match with coronavirus.

The black demons that come for the children made me think of this WHO mouth piece saying "we might have to remove family members from their houses".

The patent, which contains the numbers 2020 and 666, describes a system that reads out information of a user's body, sends it back to a server and couples that data to a cryptocurrency system.

In context of the coronavirus, this extremely invasive technology could be used to read out the bodies of people to indicate if you're infected or not.

The applicant of the patent is Microsoft LLC. The man behind Microsoft, Bill Gates, has invested big money in vaccination companies and ID2020 (links vaccination certificates to a digital identity). He will cash in big time if the whole world gets his (recurring) vaccines and tracking technology.

Moving ever closer to a situation where one is not able to buy or sell without a vaccine and this technology, it is a prime candidate for the mark of the beast.

In this house resolution we see again 666. Because resolutions have to have four numbers, another six is appended.

The resolution wants to test en trace everybody. A government simply has no business entertaining such constitution violating notions. To me it's clear, the governments went rogue and carry no validity anymore.

For all of these shenanigans, a whopping budget of 100 billion dollar is available.

Stand 6 feet apart, rule of 6 (gatherings of no more than 6 people) for the next 6 months.

The WHO identified nCov-2019 after it received a report with a number of infected people from Wuhan Municipal Health Commission on December 12 of 2019.

The freemasons/freemasonry is a secret society with members in the highest ranks of business and science.

Freemasons attribute great value to the number 33. One example, there are 33 levels in the organization, the 33th being the highest level. Another is the 33 sections on the world map of the WHO logo.

The published SARS-CoV-2 genome ends with 33 A's. As we saw before, in numerology A stands for the number 1.

Genomes of natural origin never have such blocks of identical nucleotides.

"star-like old senile to kill". What could that mean?
Humans are created from star dust and the star of God's creation.
Yet, artificial intelligence regards us as senile and wishes to kill the old human genetics.
The "shed snake skin" seems out of place, yet winks to transhumanism.

From a Latin perspective.

From the Roman family name Ovidius, which was derived from Latin ovis "a sheep". Publius Ovidius Naso, better known as Ovid, was a 1st-century BC Roman poet who was most known for his work Metamorphosis (like transhumanism?). He was sent into exile where he kept longing for Rome (the Vatican).

Ipsos MORI is a Latin sentence and the name of a company involved in a major COVID-19 home testing program in the UK [Ipsos MORI official site].

Ipsos MORI can be translated to:

LAT Quod deceat cariorem nobis esse patriam quam nosmet ipsos.
EN Because it becomes us to love our country more than ourselves.

LAT propter ipsos consulendum.
EN for its own sake.

Most people looking at the testing truck identify the logo with Anubis, the Egyptian god of death. The head is very similar and the nemes (headpiece) is characteristic to the pharaohs of Egypt.

The god of death could easily be categorized in the same spirit as the British COVID-19 testing company, named Ipsos MORI which means "they / ourselves die".

Be aware of plausible deniability before you run to your friends 🙂
The truck belongs to a company named Aardvark, which has the animal as a logo.

To be fair, the nose of the animal doesn't resemble the nose of your typical Anubis drawing and the nemes could be interpreted as the body & feet. It just depends on how you want to interpret it.

At the bottom, there's a tower with rainbow colored circles radiating outwards spherically. Seeing it as a 5G tower wouldn't stretch my imagination.

The logo above the tower very much resembles a typical coronavirus representation. In the center there's a "pie" with a piece missing with a T in it, which given the context might stand for transhumanism.

Then, there are two twenties on the bill, together forming the year 2020.

Finally, the head of the "queen lizzard" is giving you a loving stare :'D

The link between WEF en COVID-19 can easily be established via its founder, Klaus Schwab, who published a book titled COVID-19: the great reset.

The great reset is a moment in history, a crisis (covid-19), that allows the implementation of a technocracy, which boils down to a prison planet with intrusive surveillance using technology going as far as inside your body (vaccine).

Once the false-flag pandemic destroyed global economies, the globalist intend to "build back better", for them. This mantra has been repeated by heads of states all around the world.

Graphene has an intimate relationship with 666.

Carbon has 6 neutrons, 6 protons and 6 electrons.

Carbon is essential to life, yet in its graphene allotrope it's toxic.

A common logo for graphene is three hexagons.

Three hexagons are thus a visual representation of 666.

There's supposedly a big hexagon shape on the northern side of Saturn.

A fan of Saturn is in all likelihood a fan of hexagons.

Note how the word Saturn and satan sound similar.

By adding three specific lines to a hexagon, you get a cube.

The silhouette of this cube remains a hexagon though.

Cubes are often the subject of worship.

Worship of a cube or the cube god is therefore Saturn worship or satanic worship in disguise. 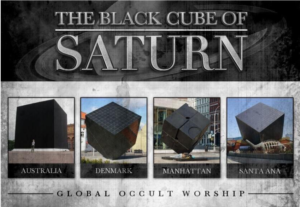 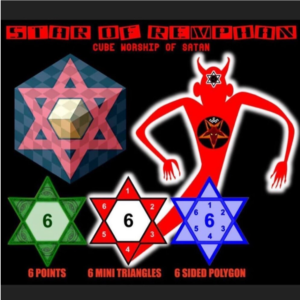 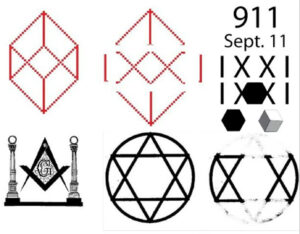 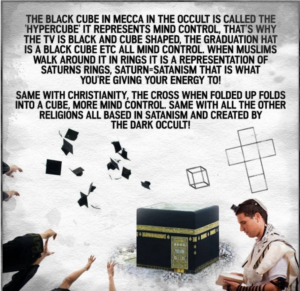 A rather random addition, YouTuber Ja De created a video production G R A P H E N E | Gaga (backup) with footage from 'Fame (director's cut)' and graphene infotainment. The Gaga footage has profound satanic vibes. In the Fame credits, we read Nathan Crowley is the production designer. According to whale.to, a direct descendant of notorious satanist Aleister Crowley.

I wrote extensively on this topic in this article.

Face masks were used to punish slaves. As long as we accept anybody or anything to rule us, like government, we are indeed slaves.

The face mask hinders your ability to speak and it removes your expressions from your face. As such the mask communicates the removal of free speech and individuality.

The WHO played/plays a key role in the scamdemic and the supposed need for biosecurity which serves directly the technocratic agenda's: UN agenda 2030, The Great Reset (WEF) & the 4th Industrial Revolution (WEF).

One can swap the letters of coronavirus around to carnivorous.

The anagram is the most ambiguous on this list.. It could be a wink to satanic rituals where human sacrifice and blood drinking appears to be a thing.

It could also be an inside joke to the fact that the mainstream narrative pinpoints the virus originating from carnivorous bat-eating Chinese people. Pushing the joke even further, now The US Mint came out with a new design for the quarter: a bat. Allegedly, a Samoan fruit bat in honor of the National Park of American Samoa.

Nanotech, microtech, biotech, graphene and self-assembly in the COVID-19 shots.

Viruses do not exist

We use cookies on our website for an optimal experience and analytics. By clicking “Accept”, you consent to the use of all the cookies.
OK
Manage consent

This website uses cookies to improve your experience while you navigate through the website. Out of these, the cookies that are categorized as necessary are stored on your browser as they are essential for the working of basic functionalities of the website. We also use third-party cookies that help us analyze and understand how you use this website. These cookies will be stored in your browser only with your consent. You also have the option to opt-out of these cookies. But opting out of some of these cookies may affect your browsing experience.
Necessary Always Enabled
Necessary cookies are absolutely essential for the website to function properly. These cookies ensure basic functionalities and security features of the website, anonymously.
Functional
Functional cookies help to perform certain functionalities like sharing the content of the website on social media platforms, collect feedbacks, and other third-party features.
Performance
Performance cookies are used to understand and analyze the key performance indexes of the website which helps in delivering a better user experience for the visitors.
Analytics
Analytical cookies are used to understand how visitors interact with the website. These cookies help provide information on metrics the number of visitors, bounce rate, traffic source, etc.
Advertisement
Advertisement cookies are used to provide visitors with relevant ads and marketing campaigns. These cookies track visitors across websites and collect information to provide customized ads.
Others
Other uncategorized cookies are those that are being analyzed and have not been classified into a category as yet.
SAVE & ACCEPT
Go toTop